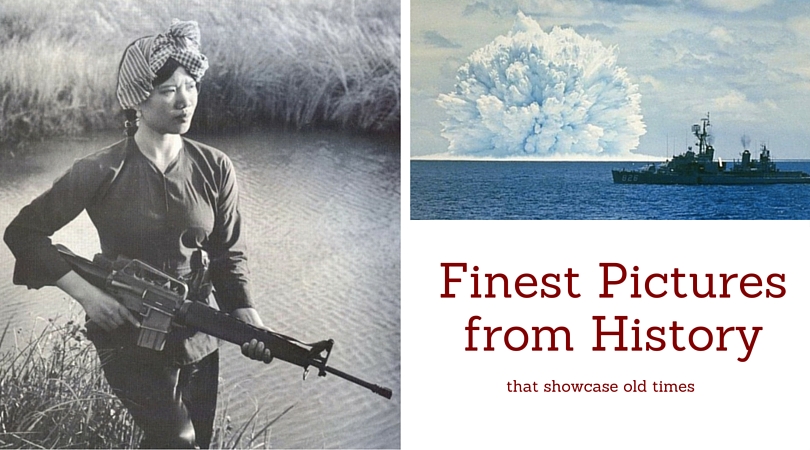 Collection of some best history pictures of 1900s. It includes the customers at London music store, listening the latest music records in sound proof booths, traffic on golden bridge soon after it opened, Apollo 9 Lunar Module, a World war 1 submarine, Yuri Gagarin-the first man in space, Mercedes 770K-Adolf Hitler’s present to C.G.E. Mannerheim on his 75th birthday and many more pictures that will help you to better understand the history.

1. Two border patrol officers attempt to keep a fugitive in the US, 1920s.

3. Customers at a London music store listen to the latest record releases in soundproof listening booths, 1955.

5. Great-great-grandfather in his German police uniform & with his K-9, early 20th century

6. Traffic on the Golden Gate Bridge soon after it opened in 1937

9. Preparing for an assault on a warehouse in Stalingrad, most likely in the later part of 1942

11. Children in Barcelona pretending to be a firing squad at the dawn of the Spanish Civil War

13. U-118, a World War One submarine, washed ashore on the beach at Hastings, Sussex, England. After the surrender of Germany, its towing cable snapped as it was being towed to France for dismantling in 1919.

15. Downtown San Francisco after the earthquake of April 18th, 1906

16. A young cigar maker in Tampa, Florida smokes in this picture taken in a cigar factory. 1909 photograph taken by Lewis Hines.

18. Beatles in action at the Cavern Club

19. “Women to the left, men to the right”. A British checkpoint restricts movement of the Northern Irish in Belfast’s commercial district – Northern Ireland, 1973.

24. “Burst of Joy”: After spending more than five years in a North Vietnamese POW camp, Lt. Col. Robert L. Stirm is reunited with his family at Travis AFB, March 13, 1973

26. A young private waits on the beach during the Marine landing at Da Nang, Vietnam, August 3, 1965

32. An underwater nuclear test being conducted during Operation Dominic, Pacific Coast off California, 11 May 1962

33. Children eat their ice creams while soldiers patrol the streets of Londonderry 1979