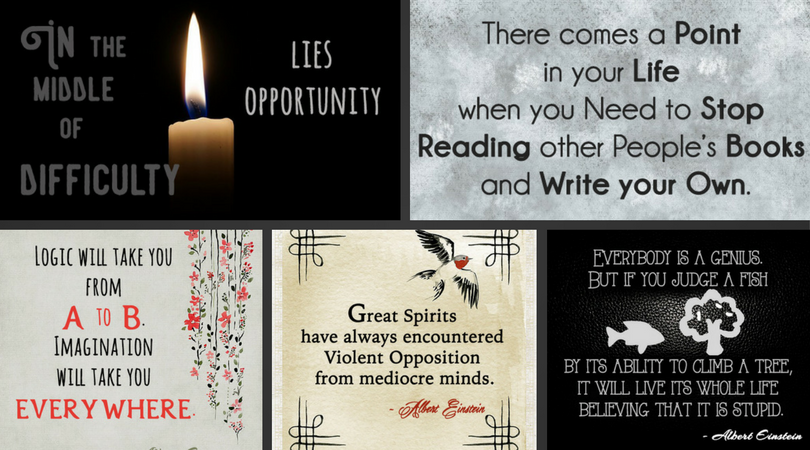 Imagination is more important than knowledge. Knowledge is limited. Imagination encircles the world.

Everybody is a genius. But if you judge a fish by its ability to climb a tree, it will live its whole life believing that it is stupid.

Education is what remains after one has forgotten what one has learned in school.

Stay away from negative people. They have a problem for every solution.

There comes a point in your life when you need to stop reading other people’s books and write your own.

A Ship is always safe at shore but that is not what it’s built for.

You have to learn the rules of the game and then you have to play better than anyone else.

If you can’t explain it to a six year old, you don’t understand it yourself.

Once we accept our limits, we go beyond them.

Life is like riding a bicycle. To keep your balance, you must keep moving.

Don’t be disappointed if people refuse to help you. Remember the words of Einstein: “I am thankful to all those who said nO. Because of them, I did it myself.”

In the middle of difficulty lies opportunity.

A question that sometimes drives me hazy: am I or are the others crazy?

“Any intelligent fool can make things bigger, more complex, and more violent. It takes a touch of genius — and a lot of courage — to move in the opposite direction.”

“Imagination is more important than knowledge.”

“Gravitation is not responsible for people falling in love.”

“I want to know God’s thoughts; the rest are details.”

“The hardest thing in the world to understand is the income tax.”

“Reality is merely an illusion, albeit a very persistent one.”

“The only real valuable thing is intuition.”

“A person starts to live when he can live outside himself.”

“I am convinced that He (God) does not play dice.”

“God is subtle but he is not malicious.”

“I never think of the future. It comes soon enough.”

“The eternal mystery of the world is its comprehensibility.”

“Sometimes one pays most for the things one gets for nothing.”

“Science without religion is lame. Religion without science is blind.”

“Anyone who has never made a mistake has never tried anything new.”

“Everything should be made as simple as possible, but not simpler.”

“Common sense is the collection of prejudices acquired by age eighteen.”

“Science is a wonderful thing if one does not have to earn one’s living at it.”